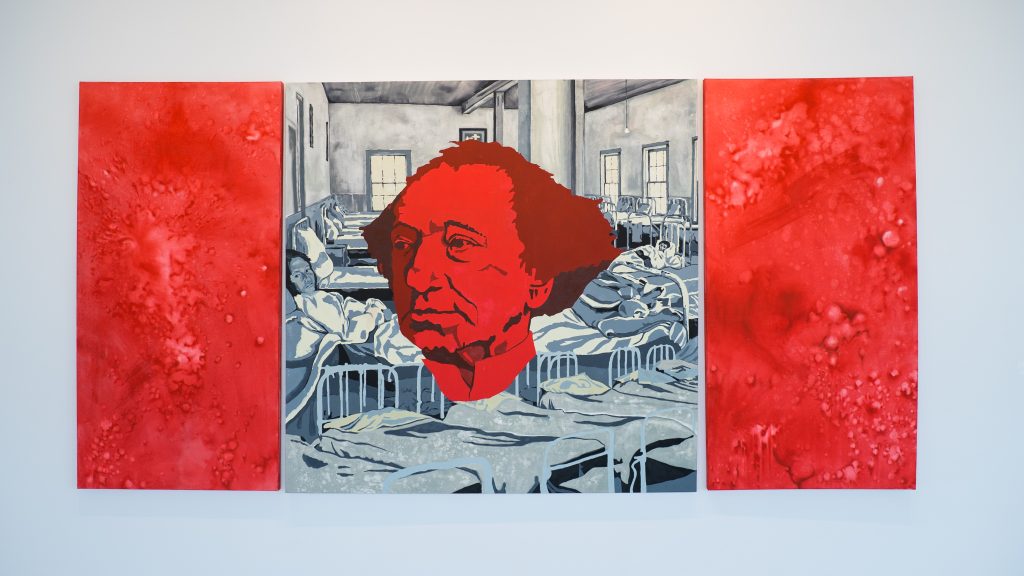 This Canada Day, WAHC presents the painting ‘Oh, Canada’ by artist Tia Cavanagh to share a critical Indigenous perspective on a day many settler Canadians celebrate. In lieu of the celebratory, we join with others to reflect on the violence of settler colonialism and the struggle for Indigenous sovereignty. Here Tia reinterprets the Canadian flag to generously offer us insight into the formation of Canada. She directly and powerfully implicates John A. MacDonald in the implementation of the Residential School system to question who we memorialize in bronze and to challenge the dominant narrative surrounding Canada’s formation.

Here’s what Tia says about her work:

“My work, Oh Canada (2017), sits at 5’x10’ and is a reinterpretation of the Canadian flag. John A. Macdonald’s head is positioned in the middle where a maple leaf would be. My intention is to challenge nationalism by highlighting the Indian Act and the legacy and impact of Residential Schools. Macdonald’s face is recognizable; many schools in Canada are named after him, he is on a 10-dollar bill, there are statues of him in so many cities across Canada–and this country glorifies him. I want to illustrate history differently and, in this work, I’m referencing generational trauma, systemic racism, and continued colonization to provide an authentic narrative to the creation of Canada. The red panels of this painting are created with the action of applying paint thinner to achieve texture. The action of removing pigment with paint thinner relates to the process of assimilation and theft of Indigenous culture, language and autonomy. The red panels represent the treatment of Indigenous bodies and land and so the texture I have achieved is visually visceral. Behind MacDonald’s head there lies imagery of residential schools. The stark contrast between the head and the background illustrate the abrasive, harmful, and non-consensual nature in which policy was enacted.”

“With more and more unmarked graves of Indigenous children being found it is important to allow Indigenous peoples space to grieve and be outraged if they so choose. Rather than perpetrating a narrative of victimization on this Canada Day, let’s hold perpetrators of violence accountable, whether that be an individual, a neighbour or a body of power. Try to better understand Canada’s colonial history and do not stop until you understand systemic racism and oppression; because only then will you know it isn’t “just in the past”. 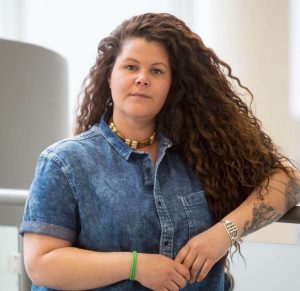 Originally from the northern shores of Lake Huron in Ontario, Tia Cavanagh (Anishinaabekwe, Mukwa Dodem, Sagamok Nation) has lived and studied in Peterborough, Montreal and Toronto. Achieving her BFA at OCAD university she now studies at Trent University working on her Masters degree in Canadian and Indigenous Studies. Cavanagh is a multi-disciplinary artist using materials such as paint, wood, fabrics, sculpture and projection. For her, storytelling, process, discovery and new meaning are at the core of art making. With these aspects at the root, she continues to explore approaches and understanding through the creative lens of an Indigenous woman drawing upon Indigenous research methodologies.